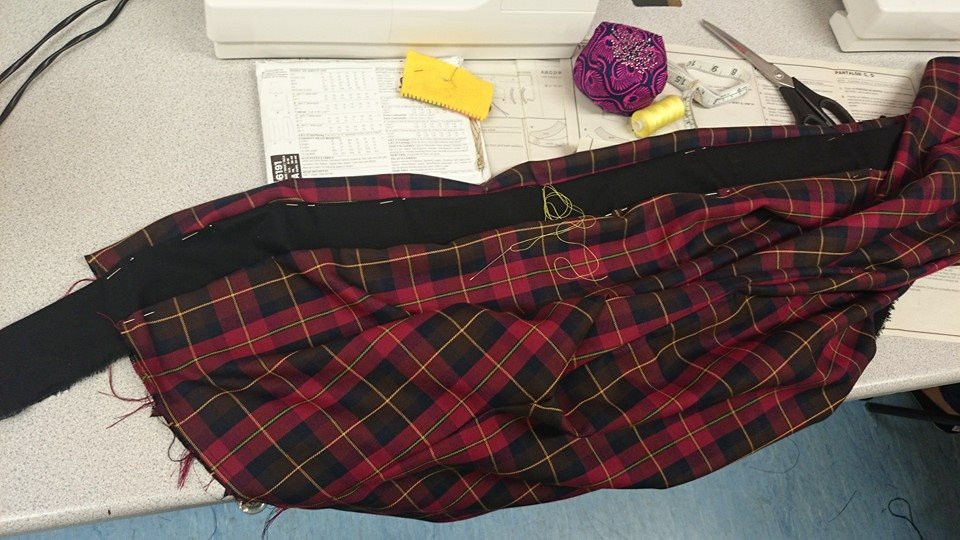 I worked on a number of dressmaking projects over a relatively short space of time which involved using a combination of no pattern at all (paisley skirt), using an existing garment and attempting to recreate it into a toile pattern (patchwork skirt), using a downloadable pattern (Pam dress) and using a bought printed pattern (pink skirt and tartan trousers). As I don’t have much really to say about each particular project, I thought I’d share them in the same post as it covers a wide range of approaches to dressmaking.

The first project was a pink skirt with a print that reminds me of a peacock feather type pattern which had a concealed zip and belt tie attached to the top. This was completed in October and worn to the Piet Mondrian exhibition I attended with my Nanna at the Tate Gallery in Liverpool. I even managed to create a colour coordinated outfit with a top and scarf in similar colours and that is a very rare sight (ask my sister!). 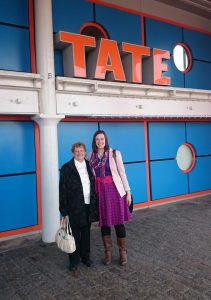 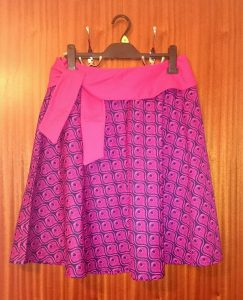 The next project was a long drawn out process of trying to work out the shapes of the patches from an existing skirt that I didn’t want to pull apart (it is my favourite skirt) but once the panels/patches were drawn and cut out, I had to label them up and match them up with the correct sides joining together. This was an epic task and was very frustrating. Making the skirt when I eventually get around to it, will be a long process. I will have to invest a decent amount of time into the planning of this. On the plus side though, I have 2 different fabrics set aside already for making it out of. The original skirt is only one colour but has a couple of different details added on including free-motion embroidery, sequins and a slight frill along one section. The fabrics I will be using are two different colours and a map print. 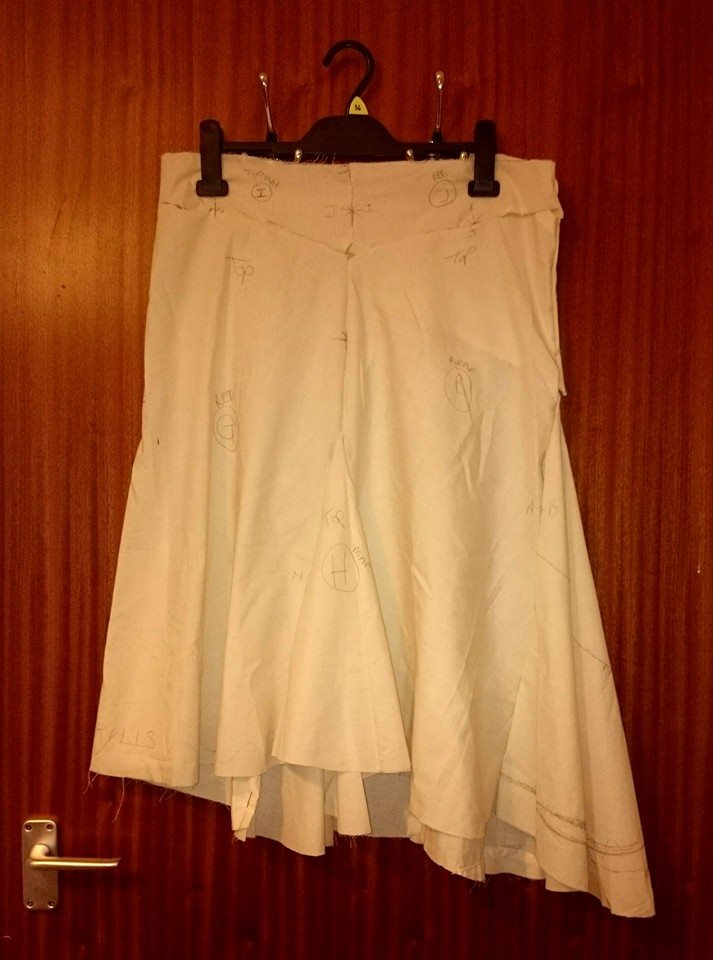 The following project was from a printed pattern for trousers (which I was told are an easy garment to make). I usually struggle to find trousers with the right cut for my shape and so I had to make adjustments to the pattern. Eventually I decided to add ‘go-faster’ stripes down the outside of each leg in a black fabric which then also tied in with the black waistband I created. With the tartan print, I also had the challenge of pattern matching so that the stripes lined up with one another across the front, back and sides as it would have looked wrong and obvious if they hadn’t lined up. I was pleased with these and I finished them in time for my works’ Christmas lunch to show off to everyone. They were some surprised faces that morning as it is a bold print to wear in an office! 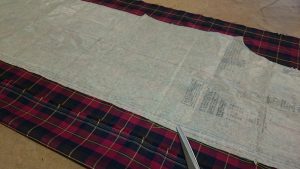 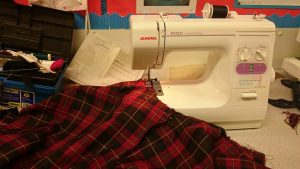 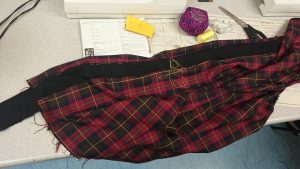 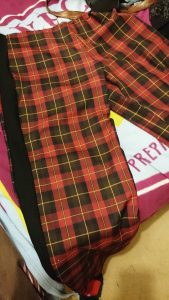 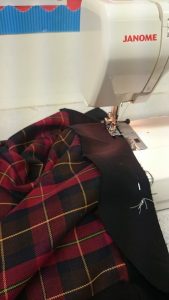 The finished trousers with a concealed zip along the side of one of the ‘go-faster’ stripes nicely hidden and belt loops along the waistband which I am particularly proud of!

The final project was a wrap around style skirt which I made up as I went along. I bought some waistband elasticated fabric (which was not available from shops in the UK, I had to go online and get it shipped over) but my favourite skirt has a waistband in the same material and it is fabulous! I had a lot of the brightly coloured paisley print fabric which is a lightweight cotton and used bias binding for the bottom hemmed edge to finish it off. I later created an underskirt (which is tight) so that if the wind blew the skirt open slightly, the reveal would only be the underskirt. This also gave a more fitted feel to the skirt and gave a nice shape to the thighs. 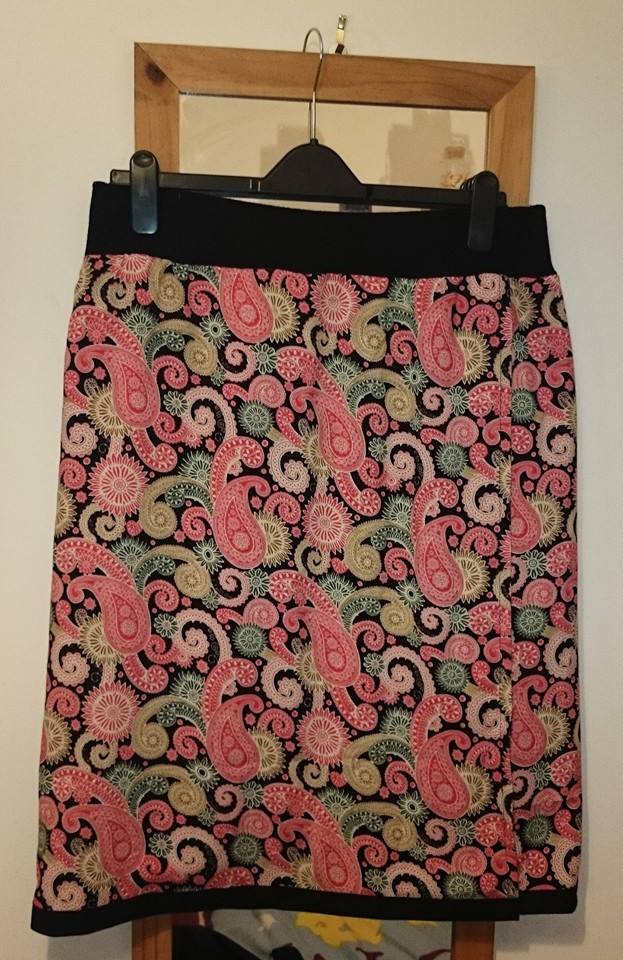 When I see these all one after the other, over the space of 2 or 3 months, I’m surprised to have managed to complete these 4 garments alongside a full time and part time job and I’m very proud of my achievements.