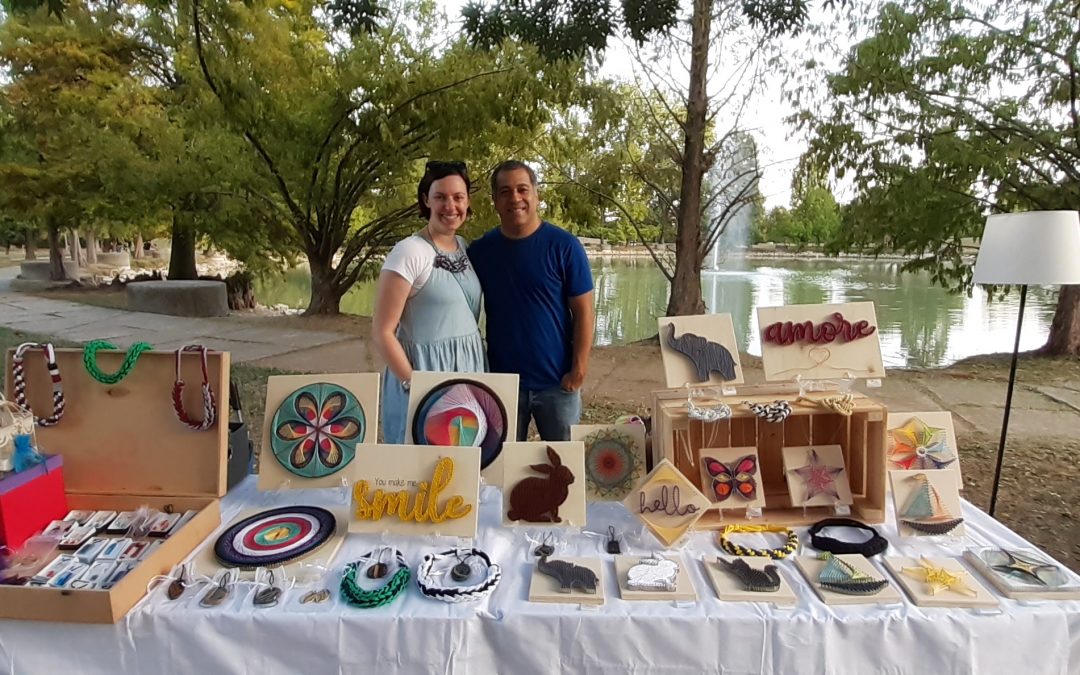 Making and selling are very different skill sets and can often be a challenge for a creative individual. I personally find the making part wonderfully absorbing but selling is not my forte. It’s like being a songwriter but not being a performer… fortunately for some, they can do one without the other. For the rest of us however, it’s time to roll our sleeves up, take a deep breath and get the show on the road!

It has been 6 years since I last sold in public, and that was in my native country of England. Doing it in Italy and for the first time was overwhelming and made me feel a little anxious about explaining what I do to the public in Italian! Unfortunately, the event wasn’t very well attended, but I was pleased with the way my stall looked. I hadn’t had a moment before arriving to plan the setup, but it went well anyway! I had purchased some ‘plate stands’ upon which I placed my string art (first time selling in public…ever!) and had jewellery on one side with most items and the others dispersed for added temptation in between the artwork.

Craft markets outside are not something I had much experience with before, and this one was also held late afternoon and into late evening. It was organised by the Little Market and is called Mercatino sotto le stelle; translated as Little market under the stars. Fortunately, the weather and temperature was better than the previous week, when the craft market was called off on the day (much to my disappointment but also relief). Due to the madness of packing up the car with all the things I thought I needed for the event, when we arrived I realised I had forgotten to pack chairs. They were actually the last thing I would have thought about while at home organising everything. Not even a fleeting consideration as I was so concerned about whether I would have enough work to fill the two collapsible tables I took. As you can see, I certainly had nothing to worry about!

We had to provide our own lighting and I was concerned that what I had wouldn’t be enough. In fact, the problem turned out to be that I didn’t take an extension lead and so had to survive with only 2 of the 3 lamps I took. In the end, I had a better lit stall than the others, as many of them had fairy lights… a string of tiny lights, so I shouldn’t have worried.

When taking part in a public event such as this one, it’s only natural and expected that you invite friends (and family when possible) to see you do your thing and give you support. I’m very lucky that I do have some great friends who were able to pass by and have a walk in the park too. It was also great to see one of my adult students and his girlfriend at the event to support me and they even made some purchases! Luckily enough, my man joined me on the stall as well as with the setup and take down, supporting me and keeping me company.

I hope the next event that I attend is in a more populated spot at a more sociable hour as I now have more confidence about putting my work out there in Italy for all to see. I hope to share future market stall details in the coming months with you… hopefully for a Christmas market!

As always, if you have any special occasions coming up that you would like to buy or commission a gift for, please contact me to discuss your ideas.