I have never really been one to read anything, and in the last few years I haven’t really watched enough TV to mention, and other than in the car I barely listen to the radio, so hearing anything that goes on in the news is not a regular occurrence for me unless someone I see at uni mentions something to me or I have a phone conversation with someone like my Grandad who will tell me anything – interesting or not!

In one of my Contextual Studies sessions this year, David Jones handed me an article he found in the Guardian Newspaper about a piece of street art in London of a rabbit by an artist called JR. this is very helpful for my essay research but I rarely go near newspapers.

Anyway, recently (as you will have read) I visited the German Market in Birmingham with two girls on my course and we happened to flick through the Metro newspaper. There were some articles relating to the tuition fee increase protests that went on in London. These interested us all and so we read them and then noticed an article about a Banksy street piece. As I am looking at street art in my work and particularly researching street art for my essay in the Contextual Studies module it seemed appropriate to read that too. I took a copy of the paper with me in the end as there seemed to be so much in it of interest.

Later in the evening I looked through my phone in the Ovi Store and downloaded the Metro News App! I have occasionally flicked through some of the articles this week and some have shocked me! I think the sort of news I am interested in is just the type that is published in the Metro newspaper and as I don’t use public transport very regularly, I wouldn’t come across it otherwise.

I have started to get more interested in the news and just thought I would make a note of it here in case people who know me fancy a bit of a shock and also as a reminder that not all news is bad news of awful things happening. Some news is very funny too like this article… 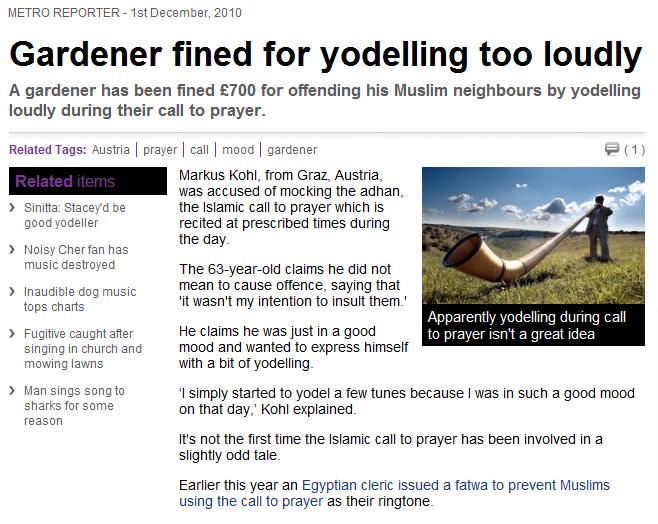