I have been making things out of old aluminium drinks cans. I first started off just painting them (two actually) but I didn’t know why… I was doing a painting at the time and I had some paint left over and the cans were just lying there. As an artist and maker, I find I rarely throw things away although other people would consider a lot if it just rubbish.

I started off with coke cans as I decided I should treat myself to something other than water or squash. I started cutting them up and thought a flower would be the easiest thing to make. I love the combination of materials and so added kitchen roll to it. This had the softness and matt texture of the tissue juxtaposed with the hard, sharp, shiny metal of the can. I also used plain white tissue with the red coke can to enhance the appearance. 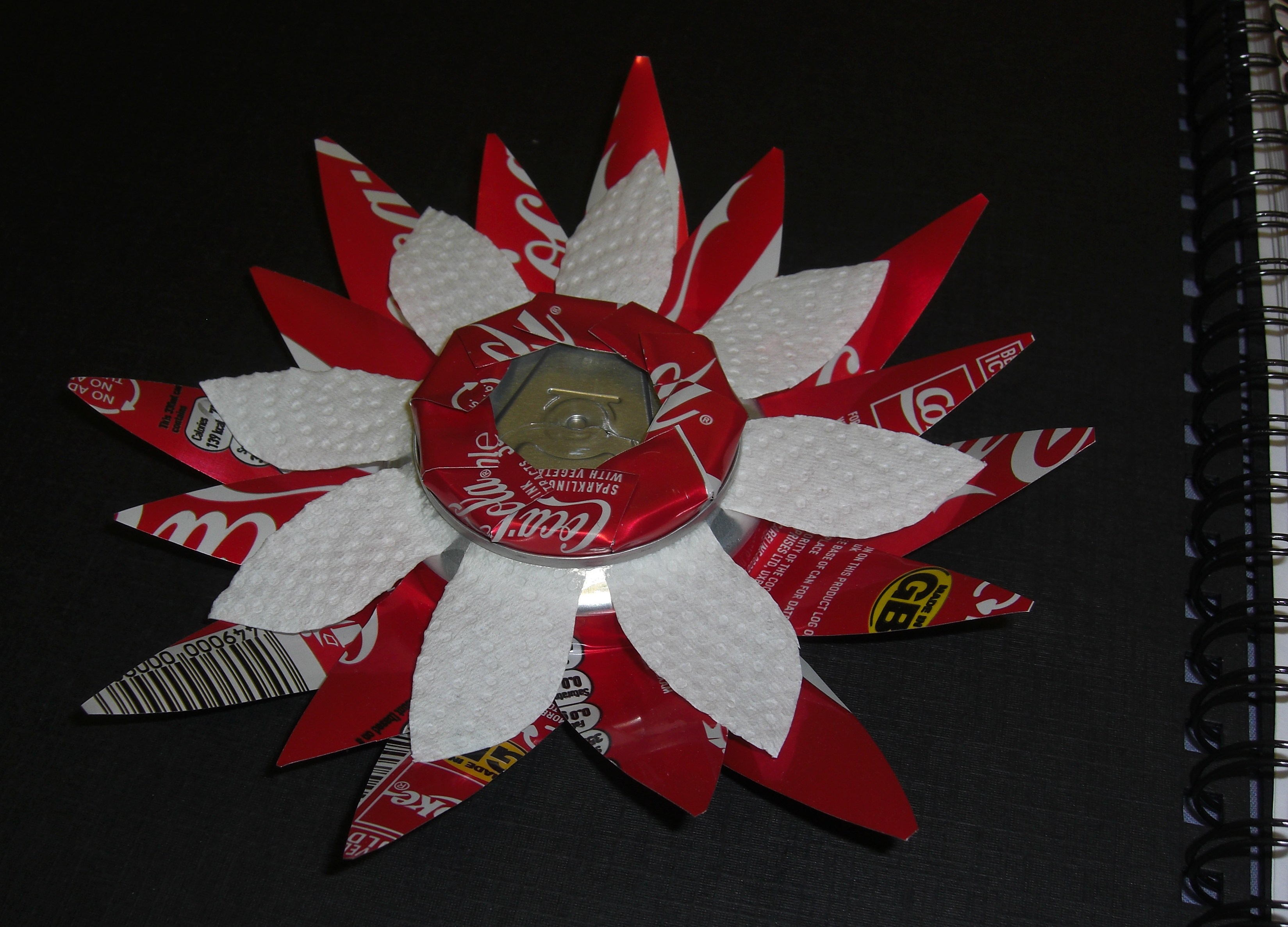 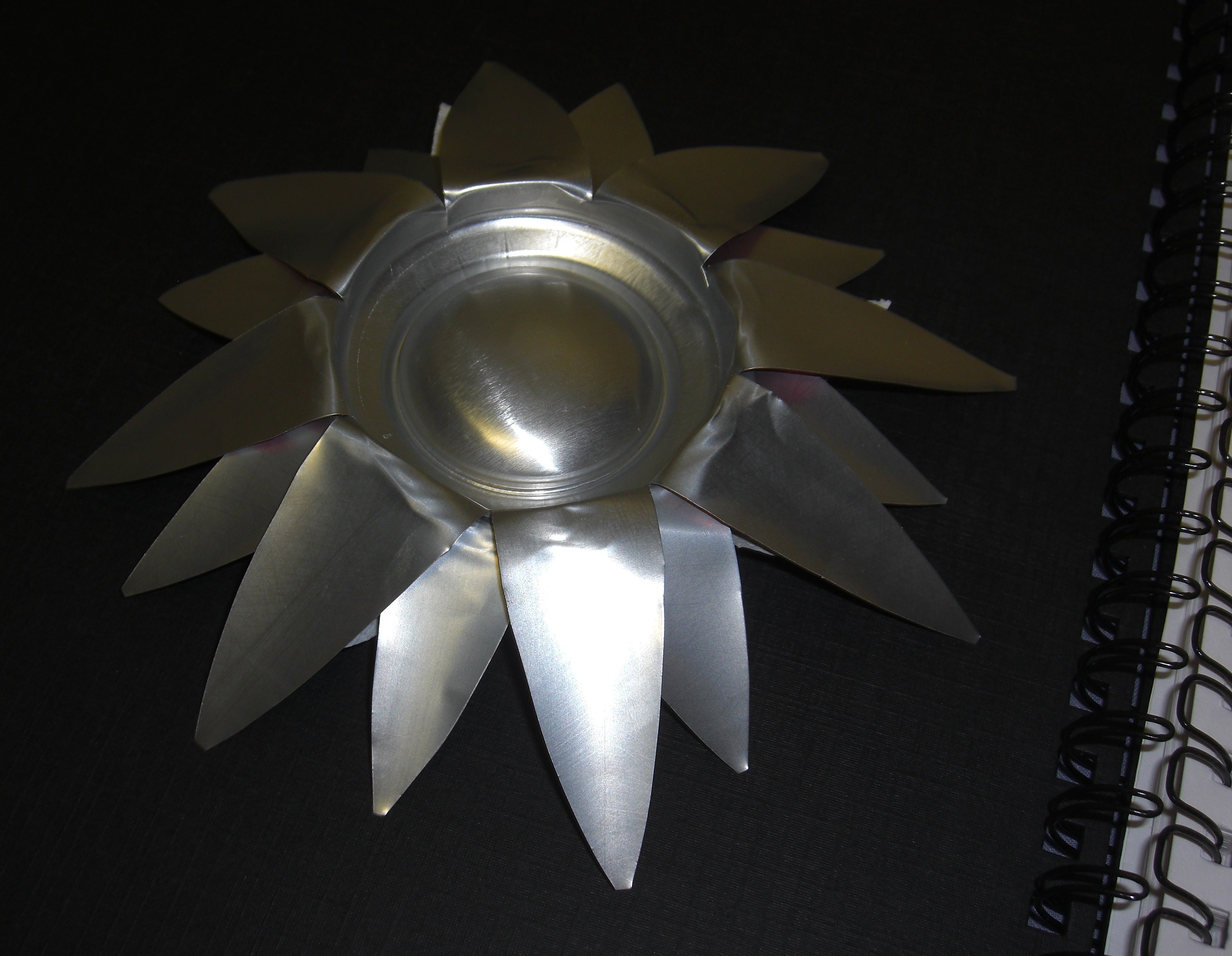 I have called this the Coke Wild Flower. I was really pleased with this and so continued. The previous was layered with the bases of two coke cans; the bottom with longer petals than the one on top, then the tissue paper glued on top, then a final can using the top bending square shapes in to show the centre of the flower. In the second I wanted to make it simpler, more bold but still with a mix of colours but only using a can. This was also a success as shown below. 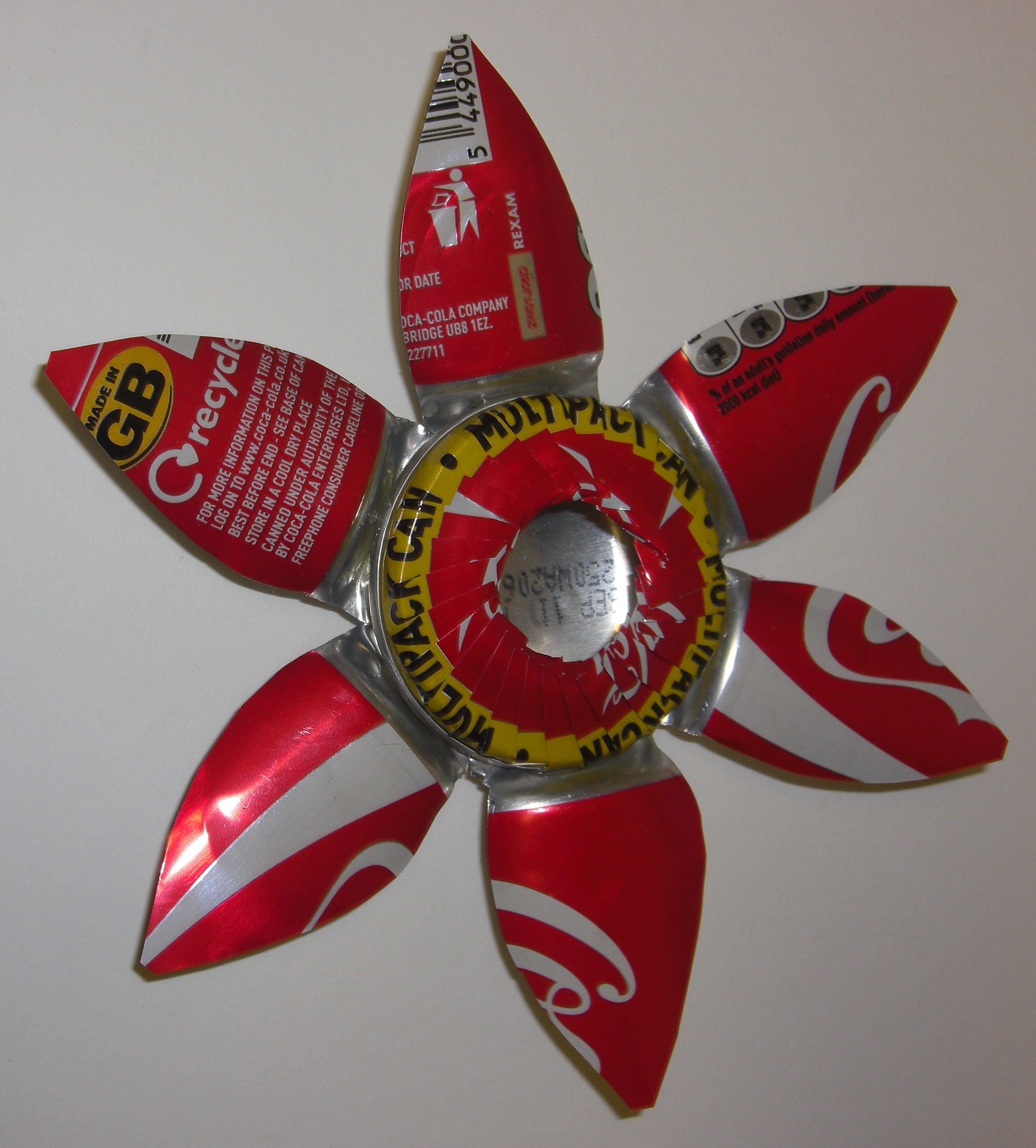 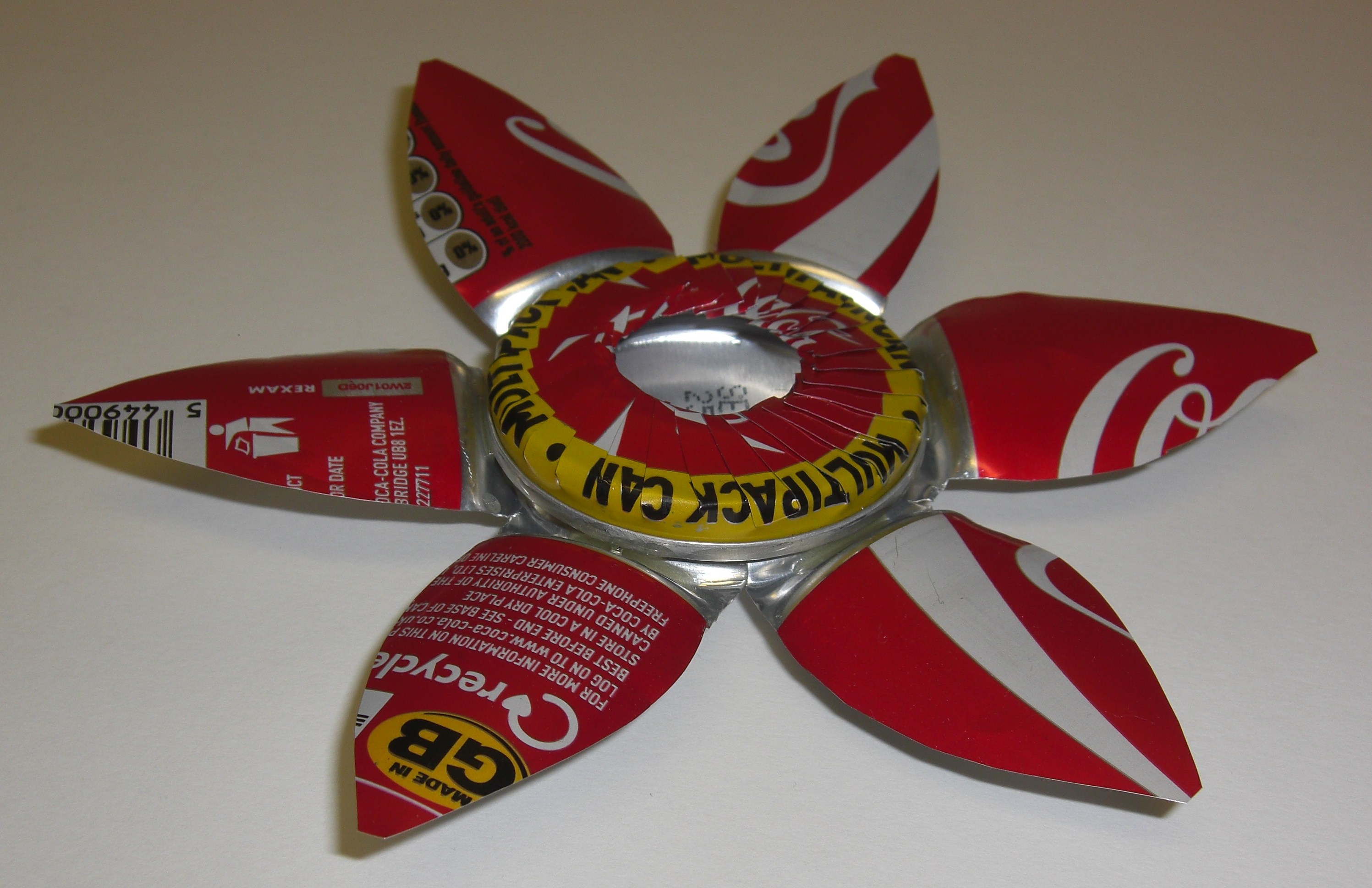 The third was very basic and less like a flower. I think it actually looks more like a windmill or one of those small wind catchers you find in souvenir shops along the beach at the seaside which children like. I wanted it to be more obvious that it was a can and to show how it was made more clearly. 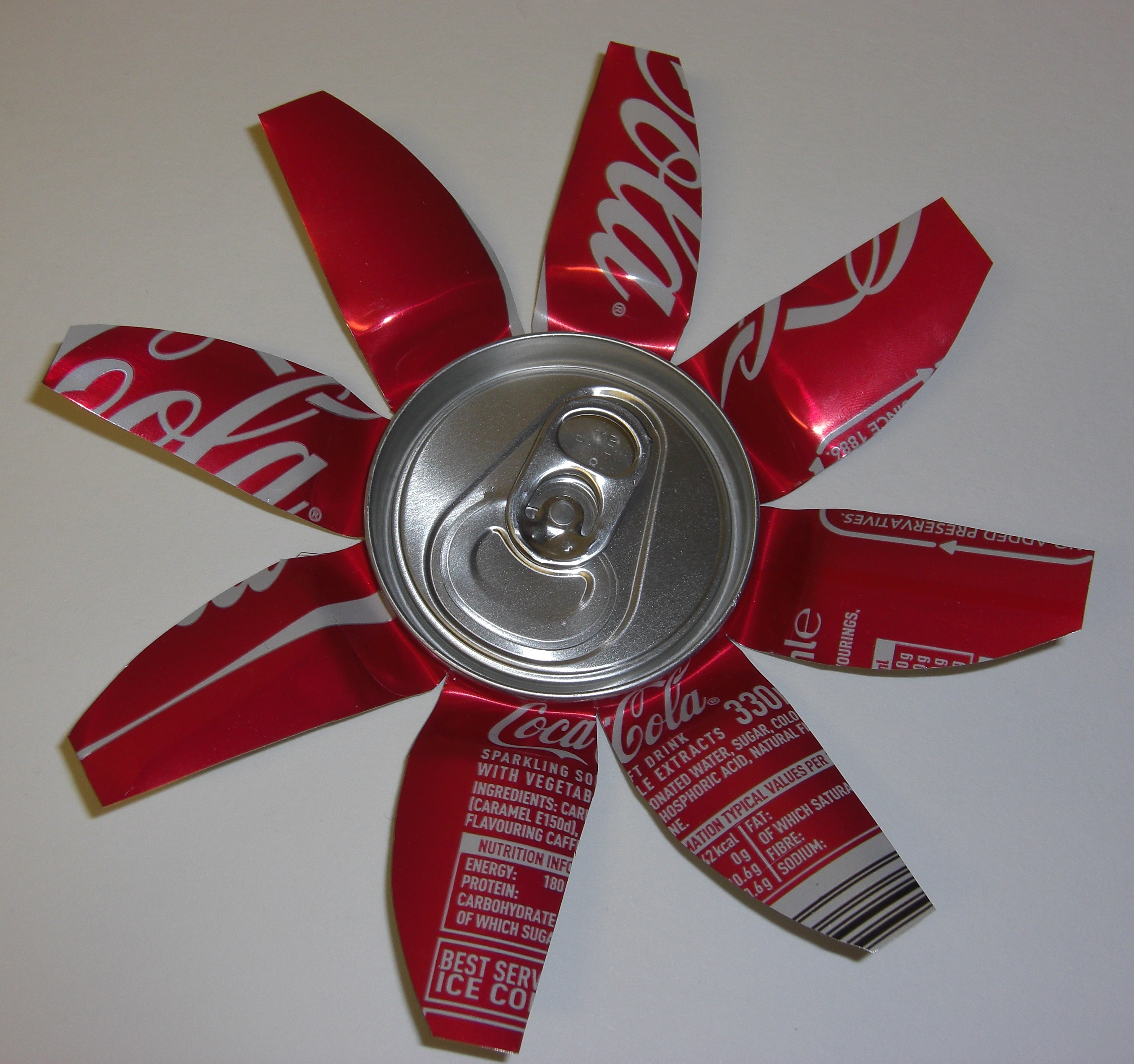 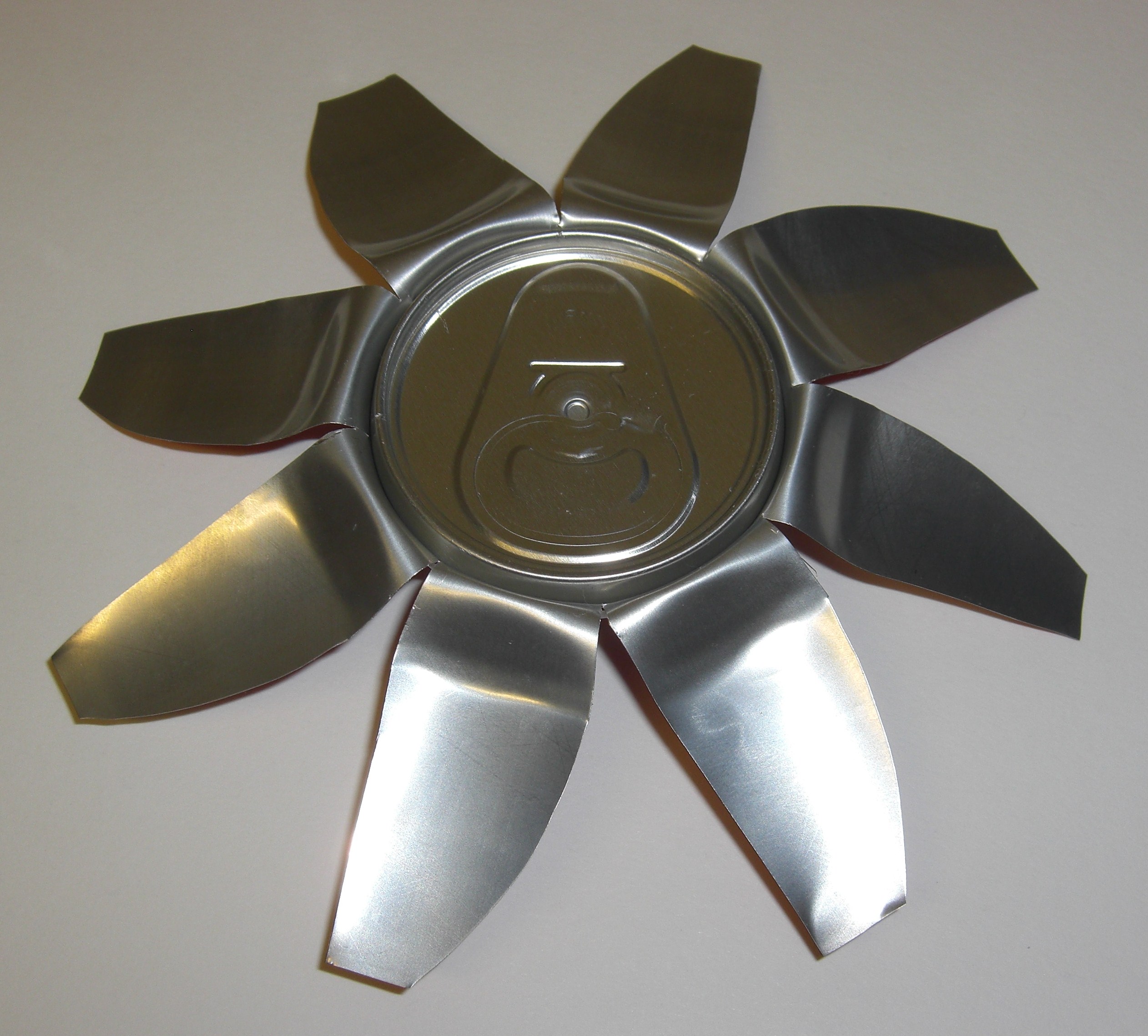 I really enjoyed making these and left it at that for a day or so. I then went on the hunt for any other drinks cans I could find which were not Coca Cola so that I would have a change from the red and white. It true recycling style, I found some on the street outside (not a surprise as I live in halls which is packed with students and after a night out there inevitably is mess left behind) and some were in the bin! Yes, I took some out of the bins! Obviously rinsed them out and I have quite a collection now. I also went home at the weekend and in a pub I visited, I took some of their empty cans back with me as well.

After considering what I found at Pitt Rivers in Oxford in the recycling cabinet, I came to the conclusion that although these flowers were great, they weren’t all that different as the centre of them all was the same size as dictated by the size of the can ends. The one I saw exhibited was smaller. I spoke to one of my lecturers in Uni; David Jones and explained what I had been doing with the flowers. As I had not done any research; visual or otherwise into real flowers, recycling or other makers who have done anything similar, I wasn’t sure how to go about making the flowers in a different way. He told me that I should first of all try it out rather than just simply copy something I have found.

I returned to my room and took out a much larger can – Tetleys Bitter. Different colours – blue with pale yellow and red & white writing. I made a paper template of a petal shape with a stem to use as a tab to attach it to something and cut out 8 petals (only eventually using 6 of them). I also cut a strip of a coke can and the Tetleys can and coiled it up to make the centre of the flower. There was a lot of mess made with the Araldite glue, but to hold it all together, this is what I had to use. I am really proud of this one, especially as it was such a hassle to make.

I also made a sunflower out of the same can and a small strand type piece which could be used in the centre of another flower. 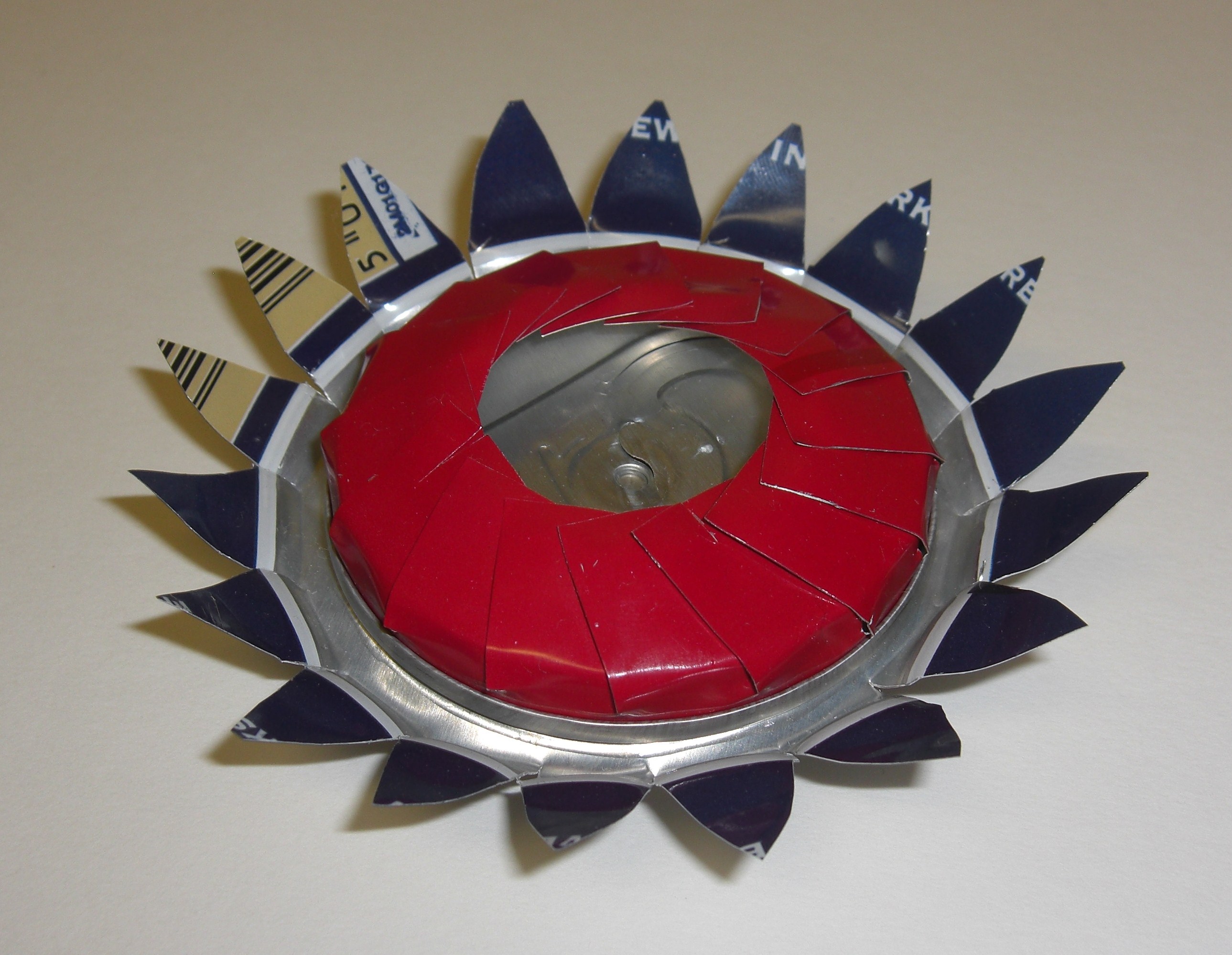 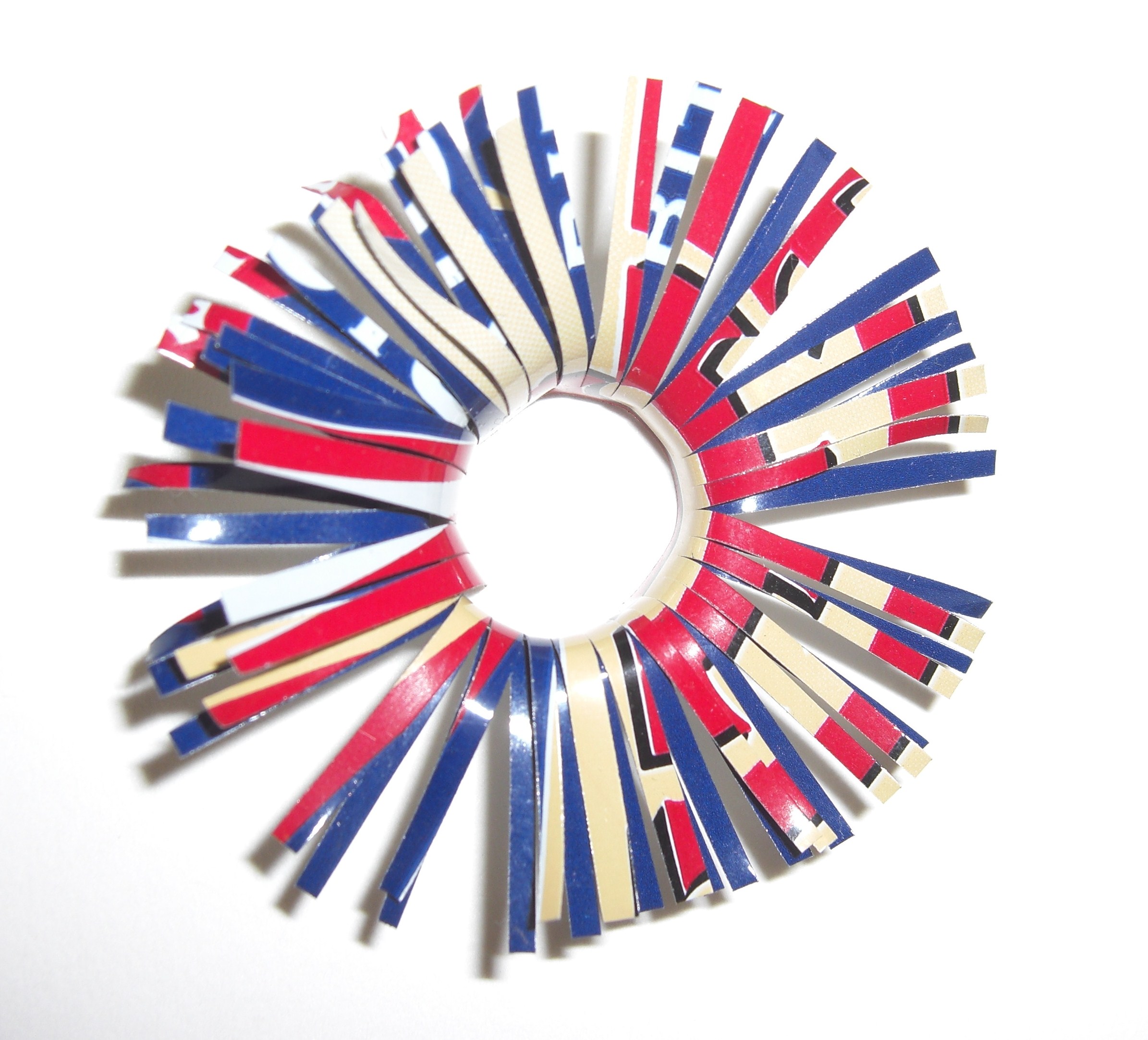 They were all very successful and I think I will try out other materials and make more flowers to see how else I can make them. This module is all about testing things out.